After sharing bicycles in some cities, shared cars have also begun to enter in many cities across the country. This new mode of travel, while achieving rapid development, has also encountered many problems such as finding a car and parking difficulties. Recently, Friends of the car rental officially announced that because the previously signed investment funds were not in place, the management decided to return all user account deposits and stop operations. After the release of this news, it sounded the alarm for the fiery shared car industry, and also worried some investors about the prospects of the car time-sharing industry.

In the interview with China Net Auto, LeTVâ€™s Zero-Popular Public Relations Manager said that the â€œfailureâ€ of friends and car rentals is not the first and will not be the last. Time-sharing leasing is an industry with strong investment. It relies solely on venture capital, which is relatively fragile. Without the planning and support of the industrial chain layout, it is understandable that the friend and car rental failures are understandable. Once used by the car, it is believed that the internal management of the friends and car rentals is chaotic and the industry is not aware enough. â€œThe operation is based on radical Internet thinking and hopes to invest a lot of money to sizzle the industry as soon as possible. These points have become the cause of its collapse. ."

In recent years, the sharing economy has been hot in China, and after sharing bicycles, the sharing of cars has taken off, and companies in various fields have rushed to seize the market. In fact, car time-sharing is not a new concept. It first appeared in Switzerland in the 1940s. Later, Japan and the United Kingdom rushed to follow suit, but did not form a scale.

The prospects for shared car development are mixed.

Since last year, the state has introduced policies to encourage the sharing of economic development. On the eve of the two sessions this year, the National Development and Reform Commission solicited opinions on the "Guidelines for Sharing Economic Development" and proposed to allow and encourage various market entities to actively explore new modes of sharing new economic formats and accelerate the formation of a policy environment that adapts to the characteristics of the sharing economy.

Not only that, but places have also issued favorable policies for the development of shared vehicles. In March 2016, Shanghai issued the â€œGuidelines for Time-Sharing Leasing of New Energy Vehiclesâ€, stating that by the end of 2020, there will be more than 6,000 time-storing service outlets for new energy vehicles, more than 20,000 pure electric vehicles and more than 30,000 charging piles. .

Recently, the Beijing Municipal Transportation Commission also said that Beijing will promote the distribution of time-sharing car outlets, and it is estimated that 2,000 cars will be leased before the end of this year. Beijing Municipal Road and Bridge Group Co., Ltd. has planned to renovate the space under more than 40 viaducts in Beijing's second and third ring roads as a â€œshared carâ€ rental point, setting up parking spaces and charging piles.

According to industry insiders, there is national and local support that plays an important role in the healthy development of the shared automotive industry. However, as it is an emerging industry, it will inevitably face various challenges in the process of growth. Sharing cars must imagine the sharing of bicycles to achieve profitability, not copying existing business models, and finding an innovative development path in combination with the market and the industry itself.

It is understood that there are multiple reasons for restricting the development of shared vehicles. First, the cost of purchasing a car is about 40% of the operating cost. Secondly, the models offered by the market are mostly new energy vehicles, limited battery life and imperfect layout of charging pile infrastructure. At one time, the car brand manager said that the parking space in the north and Guangzhou-Shenzhen was tight, and the parking spaces in other cities were relatively plentiful. However, due to the lack of management, the parking problem has yet to be resolved. At present, more care for the real operation of the charging pile is the family car, which can provide limited charging piles for the enterprise. The above problems will inhibit the development of new energy car rental.

Some enterprises have already earned profits and will continue to expand their scale of operation.

With the increasing cost of buying and raising cars in large and medium-sized cities in China, the policy of upper limit, the difficulty of getting on the license plate and the saturation of parking spaces in cities, the public has certain potential demand for â€œshared carsâ€. The consulting firm Roland Berger released 10 reports on China's auto sharing travel market analysis and forecast report in the past 20 years, saying that car sharing travel (including network car rental and car rental) has made a positive change in domestic travel conditions, expected to 2018. In the year, the potential market capacity of China's auto sharing travel market is expected to reach 1.8 trillion yuan.

â€œShared Carâ€ is still in its infancy and initial stage in China, and faces many uncertain factors. Some experts are not optimistic about this industry. They believe that there are more than 260 shared cars in operation across the country, and the competition is fierce. The low income and high cost have caused most enterprises to lose money. Under such conditions, corporate profits are far from expected. However, this view has been opposed by some companies.

GOFun, a subsidiary of the First Automobile Group, believes that â€œshared auto companies can depend on the mix of resources and the efficiency of operations and insight into the market. When the scale of the industry reaches a certain turning point (the inflection point includes the scale of the enterprise, the ability to integrate resources, After understanding the industry knowledge, battery and charging piles, and the technical maturity of the car, etc., the profit can be expected in 2-3 years. It is expected that by the end of 2017, we will expand to more than 20 cities across the country, with vehicles exceeding 10,000. The expansion to more than 1,000 service outlets will cover all first-tier cities, provincial capital cities, and coastal cities with developed economies."

At one time, the person in charge of the car market said that the starting point of the shared car is very good, but due to the complicated domestic situation, the company must achieve steady development in its development and constantly adjust its own business logic. During the interview, the car was once revealed to the reporters. The shared car that the company invested in Taiyuan in July last year has already begun to make profits. This year, it will invest thousands of cars in Beijing, and other cities will gradually increase the number of cars.

The model is the BMW i3's high-end self-driving service EZZY official said, "The company's current monthly bicycle income of 15,000 yuan, 10w registered users under the zero market budget, the real business can be profitable, while the company is planning other Derived value-added services. This year we will launch 2,000 vehicles in Beijing and 5,000 vehicles nationwide, thus achieving one million users.â€ The three companies that are operating and sharing cars in the market are full of hope for the development of the industry, and both said that they will continue in the future. Expand the market.

Shared cars not only provide convenient travel modes, but also play an important role in energy conservation and emission reduction and alleviation of urban traffic congestion. According to the American Society for Shared Economics, for every car shared, it can reduce the purchase of 13 cars and reduce the carbon dioxide emissions by 75 grams. Industry insiders also said that with the phenomenon of urban urban traffic overload, time-sharing leasing will ease parking and traffic jams for some cities. Nowadays, the policies issued by many departments are also tilted towards the industry, and the future sharing of travel will become a major trend.

manufacture and the installment of tank have no influence of the construction. There are not needed the welding apparatus, the surface is hot dipped galvanize antiseptic treatment. It's artistic durable, prevents two times pollution to water quality and it beneficial to human health. The water tank meets the construction product standardization, the serration and the factorization request.

4).Hospital,buildings,building site, school and other place ;

5). temporary water storage for expansion of the heating system, condensate tank and 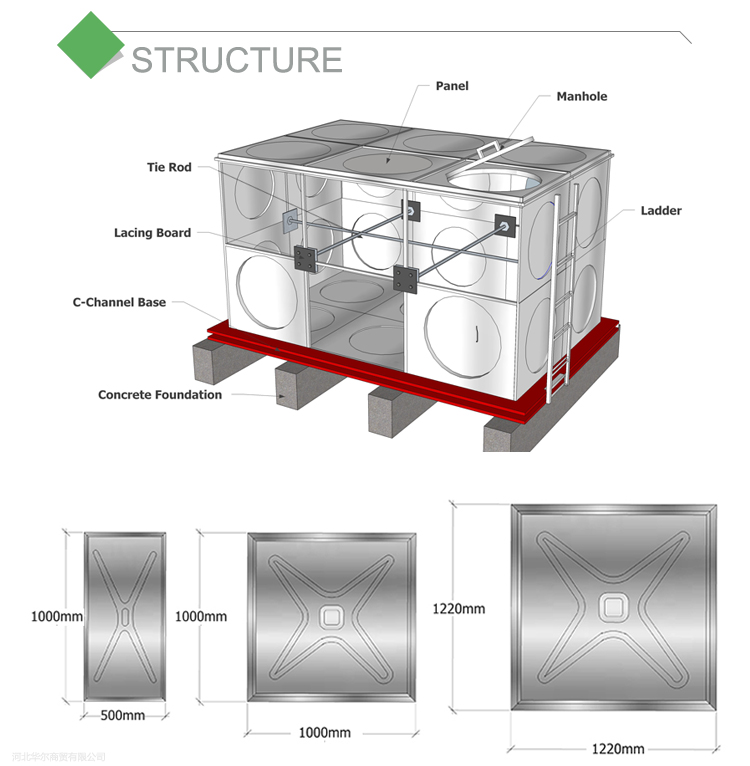 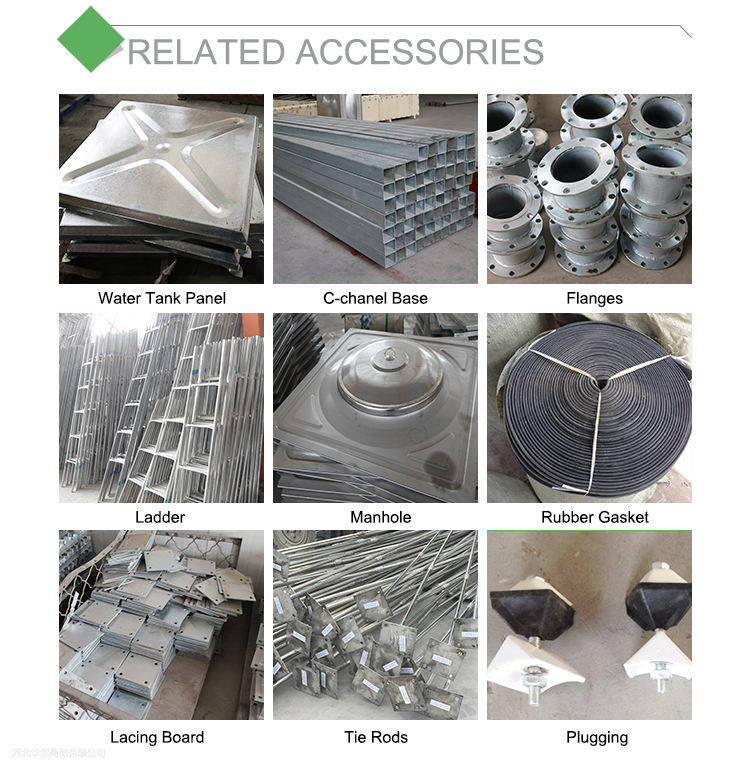