Valve foreign markets have been very active in recent years and competition is fierce. The import and export of valves in East and South-East Asia grew rapidly. Market trade between developed countries such as the European Community continued to grow. Exports from Germany, Italy, Japan, China and other countries and regions expanded, and imports from the United States, Britain, and France increased. Growth has formed a support point for the prosperity of the international valve market. Moreover, as the world economy becomes more internationalized, multinational companies will continue to promote the development of the international valve market, and the regionalization of international trade will become another major feature.

Huaxia Valve has recently obtained a foreign patent grant of 120,000 yuan, which is also the third time this company has obtained such funding. According to the statistical data of the Intellectual Property Office of Longwan District of Wenzhou City, there are currently 4 enterprises that have obtained special patent funds for foreign patents, and the total amount has reached more than 1 million yuan.

It is understood that in order to support the application for patents abroad and to protect the achievements of independent innovations, the central government in 2009 formulated the Interim Measures for the Administration of Granting Special Funds for Foreign Applications for Patents, and granted special funding for enterprises applying for patents abroad.

In April 2012, the Ministry of Finance adopted localized management of fund applications and allocations. In this regard, Longwan District Intellectual Property Office Zhu Wangchang told reporters that â€œEnterprises applying for patents abroad may receive up to RMB 500,000 in funding for each item.â€ In addition, according to Zhu Wangchang, â€œThe special funds are mainly used to fund domestic SMEs and businesses. Units and research institutes focus on supporting the needs of the countryâ€™s intellectual property strategy, which helps improve the ability of independent innovation, support the technical fields of local high-tech industries and the development of strategic emerging industries, and help build patent pools and acquire core patent technologies. And participate in the formulation of international technical standards."

1) The flow ability is improved and the dust is reduced, because of Granulator.
2) Because of powder Granulating, its solubility is improved, Mixing, Granulator and drying processes are completed in one step inside the machine.
3) The operation is safe because the anti-static filter cloth adopted. It's safe for operator if explosion take place, because explosion device is adopted. No dead corner. Therefore the loading and unloading are quick, light and clean, meet the requirements of GMP.

The powder granule in vessel (fluid bed) appears in the state of fluidization. It is preheated and mixed with clean and heated air. At the same time the solution of adhesive is sprayed into the container. It makes the particles become granulating that contains adhesive. Being of unceasing dry through hot air, the moisture in the granulating is evaporated. The process is carried out continuously. Finally it forms ideal, uniform and porous granules 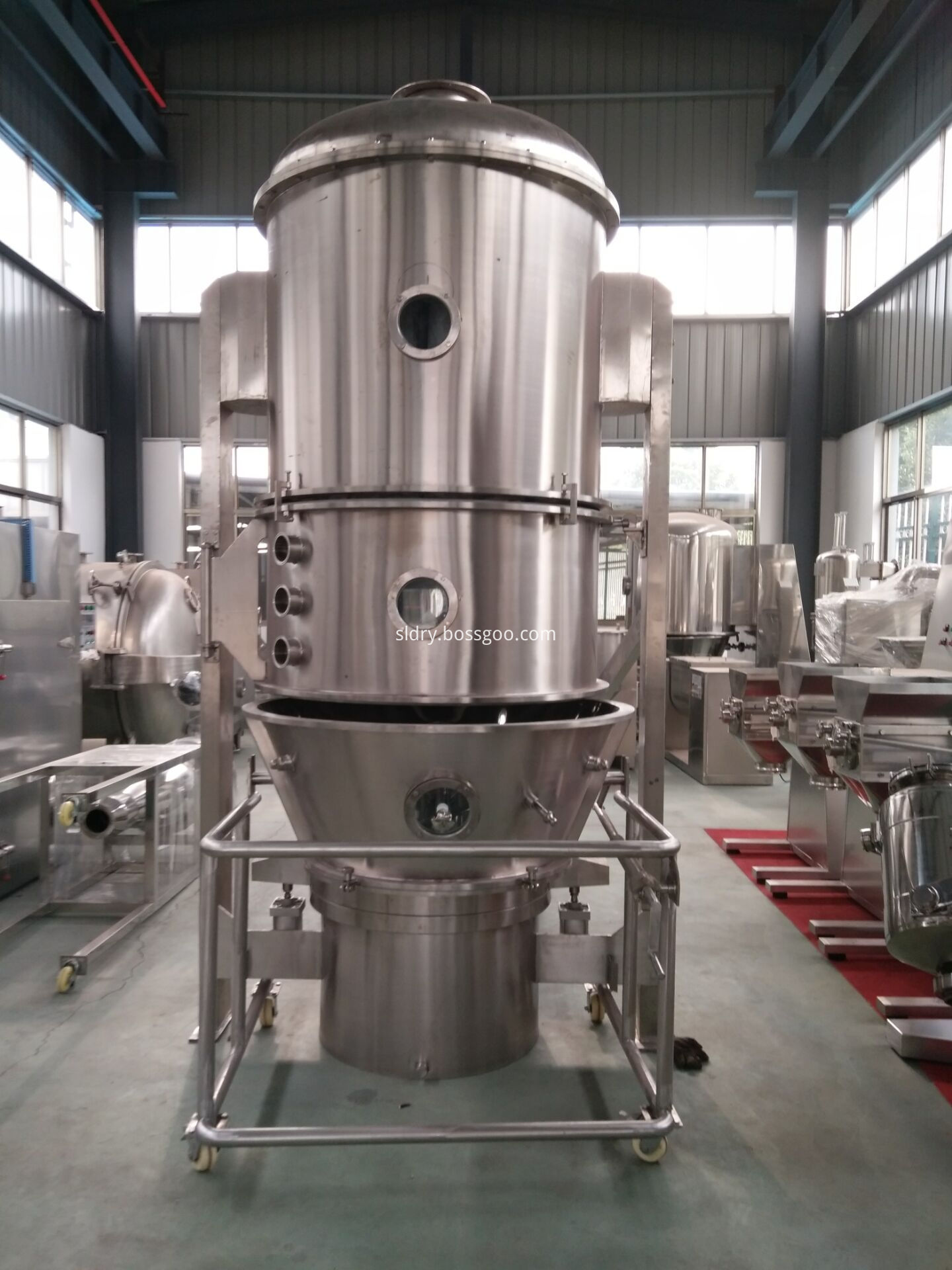